The Minister of Agriculture, Fisheries and Food visits Central Lechera Asturiana on his first visit to Asturias 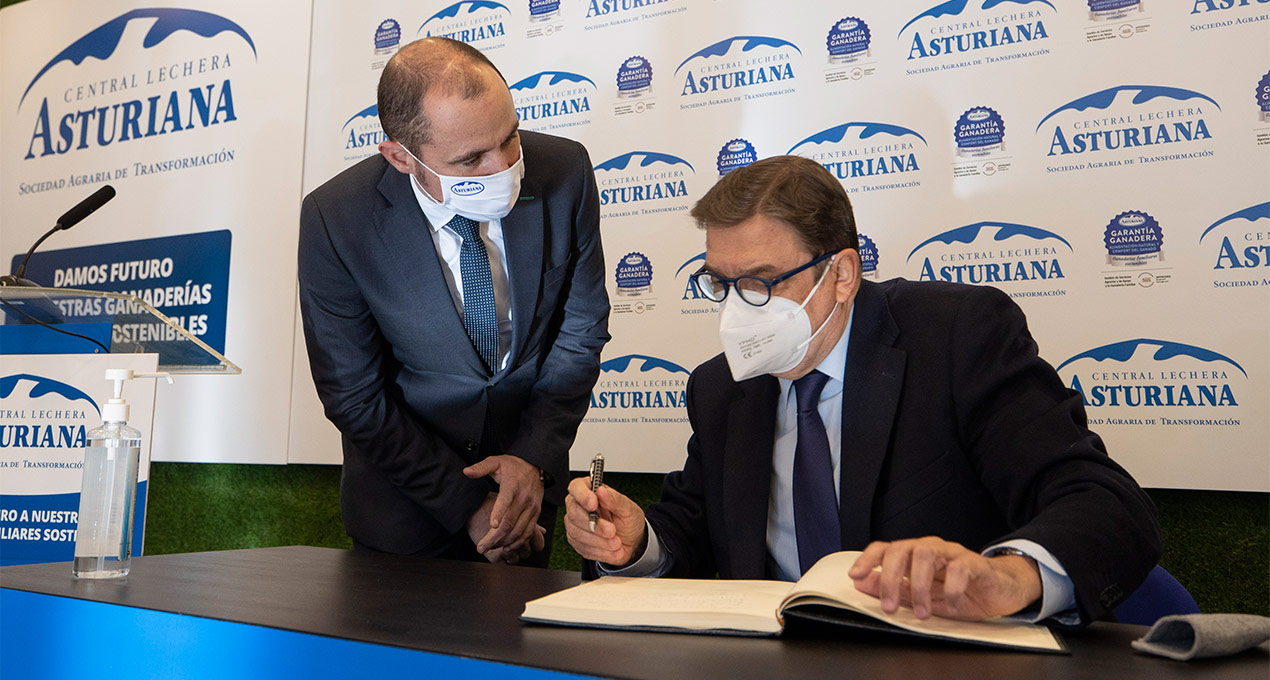 Luis Planas considers the dairy company “a leading beacon” for the agri-food sector.

On 3 December, the Minister of Agriculture, Fisheries and Food, Luis Planas, visited the dairy company’s Granda factory on his first visit to the Principality. He was accompanied by the Government Delegate and the Ministry for the Rural Environment and Territorial Cohesion of the Principality of Asturias. When he arrived at the facilities, he was received by the Chairman of Central Lechera Asturiana SAT, Alberto Alvarez, and by the Chairman of CAPSA FOOD, Bertino Velasco, along with Francisco Sanmartín, General Manager of Central Lechera Asturiana SAT and José Armando Tellado, General Manager of CAPSA FOOD.

The Minister then signed the company’s guest book and went on to praise the work of the company, for its focus on job creation and its “exemplary” relationship with its farming partners thanks to its commitment to sustainability. As he explained, Central Lechera Asturiana is “a real benchmark in the dairy sector and beyond” in the payment to its partners, and he acknowledged that he would like “this model, from the business perspective, but also in terms of territorial and social vocation, to be extended to the agri-food sector overall”.  Furthermore, he also welcomed the commitment to innovation, not only from the production point of view, but also in relation to the products of the dairy sector, and also in the commitment to environmental sustainability, in keeping with the guidelines for the European Green Deal. In turn, the Chairman of Central Lechera Asturiana SAT, Alberto Alvarez, thanked the Minister, who was on his first trip to Asturias, for visiting the dairy factory’s firm. In his welcome remarks, the expressed his “satisfaction” and the “great honour” it was for a “cooperative-based company with over 50 years of history, where the family-owned livestock farm is at the heart of its business model, and also of its success”. During his speech, he also wished to stress that Central Lechera Asturiana “is a benchmark in the national dairy sector and our aim is to ensure the future for its farming partners by offering products and services that improve the quality of life of people in a sustainable environment”.

After the speeches, the Minister, along with the other authorities and directors of the company, went on a detailed visit of its facilities. Staring with milk reception area, where he also had the opportunity to learn about the first gas-powered collection tank, the Minister visited the automated warehouse, where the product preparation process is completed.

After the visit, the Minister held a work meeting with the authorities and directors of the company, which was also attended by the members of the Central Lechera Asturiana SAT Management Committee.